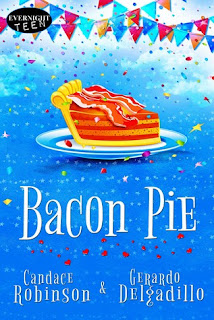 If you've read most of the book reviews on this blog, you probably know that I'm a really big fan of Candace Robinson! She writes really fun books with great world-building, and her debut YA fantasy novel Quinsey Wolfe's Glass Vault was one of the first fantasy novels that I genuinely enjoyed. So when she asked me to read Bacon Pie, I was super excited! I had never read anything by Gerardo Delgadillo before, but I am a huge fan of co-written books and alternating perspectives, so I knew this was going to be fun!

This book did NOT disappoint. In fact, I'd say it even exceeded my expectations! Even though I've thoroughly enjoyed all of Candace Robinson's books so far, I have to say that this one is my FAVORITE! So, let's start the fun!

First of all, look at that cover, and that TITLE! Even though I'm a vegetarian, Bacon Pie still appealed to me, haha! This book is just as quirky, whimsical, and fun as its cover promises, and I wasn't bored for a second while reading this.

The plot: After an awkward altercation in class, Kiev Jimenez and Lia Abbie are sentenced to community service at their town's Piggy Palooza festival. This means spending a week in the sweltering Texas heat judging bacon-pie contests, helping little kids play pig-themed games, and other annoying tasks. It doesn't help that Kiev and Lia thoroughly dislike one another. Kiev, a big Shakespeare nerd, likes to call Lia by her full name, Ophelia, after the Hamlet character. Lia hates this name and finds Kiev completely annoying. She'd rather spend all day playing vintage video games on her Nintendo Entertainment System than listening to Kiev babble on about the school's Shakespeare plays. Still, there's a spark between the two, and as antagonistic remarks turn to playful banter, and as the two bond over suffering through the same horrible Piggy Palooza experience, they end up coming together in a way they never expected.

This book has some of the most fun characters I've seen in a long time. In a lot of contemporary YA, I often get tired of seeing the same teenage stereotypes over and over again. Kiev, Lia, and their friends feel refreshing. Kiev's a funny guy who likes wearing T-shirts with bad Shakespeare puns, but still manages to attract more female attention than his goofy, womanizing friend Cole. Lia likes wearing backwards baseball caps and torn jeans, and hanging out with her best friend Barnabas, who looks like he just stepped out of a 2004 Hot Topic catalog. While they all have their quirks, each character felt fully relatable, and I felt a stronger connection to each of them and what they were going through than I did to most other teen characters I've read about.

I give this book a full 5 stars! I only had one negative thing about the book, which I'm not going to take away any stars for, because it's one small line. When Lia's talking about her parents' divorce, she says: "My dad left my mom before I was a year old and told her he just needed something different, which was Dom [the dad's new spouse]... She knew he was bisexual to begin with, so it shouldn't have been a stretch for him to end up turning gay." This line made me sad because it's perpetuating an inaccurate misconception and stereotype: that bisexual people "turn gay" when they get into a relationship with someone of the same sex. But pretty much every author/creator does this kind of thing in books/movies/TV/etc., and ALL of it makes me sad, so I'd NEVER hold it against Candace and Gerardo, who otherwise wrote a hilarious and enjoyable book.

ANYWAY, back to the good stuff. I give this book 5 stars! I'd DEFINITELY recommend this book to everyone, especially those who enjoy contemporary YA, or those who want to have some fun with a great cast of characters in a sweltering Texas town!

If you'd like to buy Bacon Pie, you can get it here on Amazon!

Have you read this book? What did you think of it? Let me know! 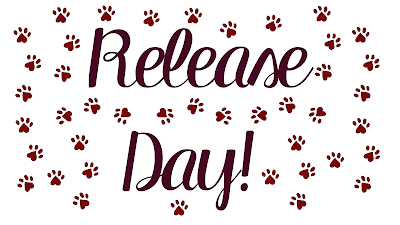