Simon vs. the Homo Sapiens Agenda
By Becky Albertalli 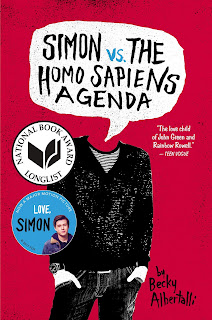 Welcome to my second installment in Pride Month Book Reviews! Today I'll be reviewing Simon vs. the Homo Sapiens Agenda, which has gotten quite a lot of buzz lately, probably because its movie adaptation, Love, Simon, released a few months ago. I'm looking forward to seeing that movie. I haven't gotten a chance to see it yet, but I'll likely try to rent it over the next few weeks and watch it, since I've heard great things.

Overall, I had so many mixed feelings about this book. During the first half of the book, it was on its way to being one of my favorite books of all time, but then the second half left me disappointed. Since my feelings on this book are all over the place, I feel like it's easiest to break this review into two parts: Things I Loved, and Things I Didn't Love. (I won't say Things I Hated, because overall the book was really good, and I didn't think there was anything particularly bad in it.)

Now, for this next part, I'm going to have to include spoilers. So if you haven't read this yet, and you don't want anything spoiled, heed this warning. You can scroll past the next section, to where I clearly mark that there are no more spoilers.

The voice! When I'm writing, character voice is the #1 thing I have fun with, and I could tell the author had a ton of fun here, too. Simon's voice was believable as a teenager. He was smart, goofy, and kinda snarky. He talked like an actual 17-year-old, not like an educated adult pretending to be a 17-year-old.

The characters! A lot of these characters felt super believable to me. Simon's parents seemed like real modern-day parents. I've read too many YA books where the parents are super easy on their kids for the sake of letting the plot move along. Simon's parents were just like mine were: they cared where their kid was, they paid attention to which friends were driving him where, and they grounded him when he got underage-drunk. Seemed believable to me! Also, I loved his friend Leah, so I was super excited to learn that there is an entire book from her perspective. I have started reading that one.

The pacing! Overall, I flew through this book. When procrastinating on finishing my finals, I read two books in one evening, and this was one of them. I read this book in basically one sitting. It captured my attention the entire way through. I never found myself getting bored or wondering how much was left. I was engrossed in the story 100% of the time.

So this is more of the spoiler-y section.

I FEEL SO BAD FOR CAL. Simon just totally forgets about him, and no one seems to care! Poor guy! And honestly, it went beyond me feeling bad for Cal; the way he was dropped from the story honestly seemed like a flaw to me, and I couldn't get past it.

I mean, for the first half of the book, Simon is super interested in Cal. He hopes that Blue, the secret guy he's emailing, is Cal. He jerks off thinking about Cal. He goes on and on about the pretty blue-green mix in Cal's eyes. Then when Blue turns out not to be Cal, he just forgets about him. Even when Cal puts himself out there and basically asks Simon out, Simon just doesn't care anymore. I was honestly so confused here. Because even if Simon is so attached to his mystery email pen pal, I don't think it's realistic that he'd completely forget about the guy he was interested in outside of that.

Here's a few ways I could've seen it going that would've made this story make a lot more sense to me:

- Simon finds out Cal is not Blue. He's disappointed. But then when Blue stops emailing him, he goes out with Cal anyway. Then we as the audience would never need to find out who Blue is, because Simon would have shown character growth through getting over the email pen pal in exchange for finding a relationship in real life. We'd be satisfied seeing his maturity and arc enough to root for this relationship.

- Or, when Simon finds out Cal is not blue, he could still try going out with Cal but realize he doesn't like him as much as he thought he did. He gives him a try only to realize that he's so attached to this Blue guy that he can't get invested in anything else, so Cal breaks up with him or something, and Simon learns not to be so obsessive. Maybe we could still see him and Blue get together in the end, but at least he would've learned something.

The way it is now, he just forgets about Cal, goes crazy over Blue not emailing him anymore, and then when he DOES find out who Blue is, they just instantly start a relationship. There was no sexual tension between him and Bram (the real Blue) throughout the entire novel. It  seems like the author wanted to choose a character no one would guess for the sake of having a plot twist, and then she went back and added in a few lines of Simon mentioning Bram is cute so that it will seem like there was some buildup. I don't buy it. There was no buildup.

The other problem with this is that Simon shows basically no character growth. One thing he does learn, which I liked, was to not make such a big deal out of everything within his family. Although he didn't seem to care that much about that realization. He is pretty much the same exact guy at the end. Just with a romantic happy ending. Honestly, I found his arc disappointing.

Overall, I enjoyed the author's voice and writing style, and I'm looking forward to reading more of her work. I'm currently finishing up her other book, Leah on the Off-Beat, which I was excited to read because of how much I related to Leah's character. I'll review that book within the next couple days here as well.

What were your thoughts on this book? Feel free to share them in the comments below!

UPDATE: I have now also seen the movie, and I have even more mixed feelings, so I'll just stop talking now.
Category: Book Reviews