I AM a Dog Mom

I identify as a dog mom, and that is a title I wear proudly. On Facebook, Chewie is listed as my son--which has led me to see a lot of baby and parenting-related ads (haha). However, I've seen a lot of articles recently telling me that I shouldn't call myself a dog mom, because that somehow undermines the work real moms do.

I never realized calling myself a dog mom was so offensive; my mom, who raised two human children as well as five dogs, calls herself a dog mom, too, and has never seen anything wrong with that. She's always referred to herself as "mommy" around the dogs, and she's always called them her fur babies--or even just her babies. In fact, my parents (who, keep in mind, also raised human children) are constantly calling themselves Chewie's grandma and grandpa (or sometimes grand-paw) and have decked their car out with "ask me about my grand-dog" bumper stickers. In my family, dogs have never been inferior to people in any way. 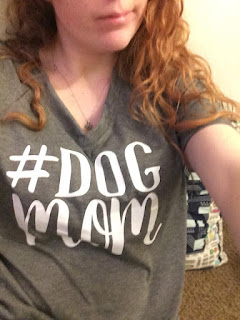 So today, I'm going to refute three articles I've found online, written by moms who think I don't deserve to call myself a mom as well. They all make some good points, but I think they have a fundamental misunderstanding of how some dog parents (I won't say "owners" and I'll explain why later) think.

The articles I'll be refuting:
"No, Your Dog is Not Your 'Baby'--Saying That is an Insult to Moms" by Elizabeth Broadbent
"Millennial Pet Owners: Stop Calling Yourselves 'Dog Moms'" by Julia Dent
"Dear Pet Moms, You Are Not a Mom" by BLUNTMoms

No, I Didn't Give Birth to Chewie (But Why Do You Care?)

Here is what the beginning of Elizabeth Broadbent's article has to say about human parents vs. dog parents:

Think about when you got your puppy. You probably picked him out at the local ASPCA, or selected him from the local breeder. Basically, you pointed to a dog and said, "That one."

On the other hand, most mothers went through nine months of body invasion, followed by one of the most intense physical experiences of her life. Then they dropped a baby on her chest. It was all agony and joy and angels singing.
Nope. That's not how getting Chewie was at all. In fact, it went more like this:
I filled out an extensive application where I wrote paragraphs about my previous experience with dogs, my thoughts about how I'd train him for different behaviors, etc. Then I had an interview with one of the heads of the shelter--similar to a job interview. Then, they brought Chewie to my house and watched me & Tyler interact with him, interviewed us some more, etc. THEN we were approved to adopt him. This whole process took over a month. So, no, I did not just point to him.
This article is correct, though, that I did not give birth to Chewie. But here's the thing--you don't have to give birth to be a mom. I'm adopted on my dad's side, which is why I get SO annoyed whenever people just forget that adoption is a thing.
Also, let's talk about same-sex couples real quick. If they're both female, yeah maybe one will give birth from a sperm donor. But they both still get to call themselves "mom." I feel like this argument about giving birth being an intrinsic part of motherhood shows a heteronormative mindset to say the least.
Oh, and for the record, bringing Chewie home from the shelter WAS like angels singing.
A Fundamental Difference in Values
Julia Dent's article says this:
The term “owner” is a more accurate acknowledgement of the power dynamics involved in the dog-human relationship. Dogs are your property.
I do not own Chewie. He is NOT my property. Sure, the government may classify him that way (which I wholly disagree with, but my crazy animal-rights-lady opinions will be for another day), but I do not see Chewie as an object. The fact that Dent feels this way just shows that we have fundamentally different worldviews--which is why we'll probably never come to an agreement. 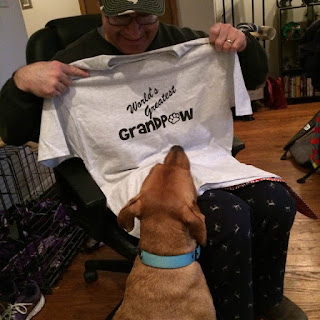 She then explains how millennials are really just using the term "dog mom" as a coping mechanism for the inability to transition to adulthood:
The term Dog Mom—mostly used by millennials—is also indicative of how my generation is coping with our transition to adulthood. Don’t get me wrong, most of the articles about millennials are absurd and overblown (see here, here, and here). Millennials living at home or waiting to get married shouldn’t be seen as a universally negative thing—both choices suggest an embrace of pragmatism and financial responsibility. Millennials are delaying #lifegoals such as getting married, buying a house, and having children due to rational financial and social pressures.
Nope. First of all, I grew up with a mom who always called herself a "dog mom"--and she was born in the late 50s, at the end of the Baby Boomer generation. So I can't see how this is a millennial issue.
Second, this has nothing to do with coping with a transition to adulthood. I am already married. I already own a home. I already run my own company. So this is all just inaccurate.
Broadbent's article says this:
You can mostly ignore your dog.
Again, I'd say this is another place where we have a complete difference in values. I do NOT think it's okay to "mostly ignore your dog" or even frequently ignore your  dog. Sure, they're more self-sufficient than infants, and you don't need to hire a sitter for them every time you go to work. But Chewie is an intelligent, active dog, and without frequent mental stimulation, he gets restless. I can't just ignore him. He needs lots of learning time and play time every day for his own mental and physical health. Plus, Chewie had a rough start, so he struggles with anxiety as a result of his past.
Why Are We Even Competing?
Yes, I will admit that--on average--raising a human child is WAY harder than raising a dog. What I don't understand, though, is why it has to be a competition. No two parents are ever going to have the same experience, whether they're raising a human or non-human offspring.
For example, a parent with a healthy child is going to have a much easier time than a parent whose child has a serious illness. Does that mean the healthy kid's parent is "less" of a parent because they didn't have to do as much work? Of course not.
How do you even define what it means to be a mom? You don't have to give birth, since adoption is huge and important. I would define being a parent as having full responsibility to take care of someone else who depends on you.
Also, while I agree that raising a human child is pretty much always more difficult than raising a non-human child, parents of human children do have one advantage: after a few years, they and their child can efficiently communicate. By two or so years old, if your kid starts crying and you ask what's wrong, most of the time they'll at least be able to say, "Hungry," or "Sick," or whatever. Chewie will never speak English to me. So when he whines at nothing, and he's already gone outside, and he has plenty of water, I'm left guessing and using trial and error until he's happy. Does that mean I have it more difficult than a human mom? Of course not. My point is, why should we even be competing? They're different experiences, yes, but every parent's experience is different!

Gatekeeping of the "Mom" Identity

If there's one thing I can't stand, it's gatekeepers: people who try to say, "You can't be a REAL x unless you do y." These people take the fun out of everything, by giving every identity a million qualifiers.
And yes, in this case, I AM going to pull out the sexism card. In Broadbent's article, she mentions how she has to constantly keep an eye on her kids to keep them safe. Great. I'm glad you watch your kids. But you do realize that not ALL moms can watch their kids 24/7, right? That a lot of moms have demanding careers? That the majority of moms are not watching their kids between the hours of 9 and 5? Even when the kids are too young for school, many kids are watched by babysitters or day-care centers. Or, sometimes, by a stay-at-home dad, or a grandparent. When I was in preschool through second grade, my mom was a single parent working four jobs, so my grandma spent a lot of time watching me instead. Does that make her less of a mom? (And yes, we also had a dog. And she was his mom, too.)

Broadbent's article says something that, in a moment, I will explain why is sexist and upsetting to me:

You're stuck with your dog ... except you're not because you can leave. Before my husband and I had kids, we traveled all the time — dropped the pups by the doggie spa, paid extra for playground time, and hopped the plane guilt-free.
I can't just leave my toddlers. Sure, maybe one day I'll be able to leave them with relatives for some overnights. But it's not quite as simple as plunking my credit card down at the kennel.
Has she never heard of day-care centers? Or babysitters? Doesn't she know that there are plenty of moms out there who have to travel for business, and have to leave their babies or toddlers as well? Are women with careers that require frequent travel not as much of a "mom" as she is?

Also, I cannot just "plunk my credit card down at the kennel." Part of Chewie's aforementioned anxiety issues include the fact that he panics around other dogs. Tyler and I have been working with him for over a year, slowly chipping away at this issue, but he's not ready to spend significant amounts of time in other dogs' presence. Because Chewie has his own baggage, if Tyler and I ever leave for a week (which we almost never do), we take the time to find a specific sitter who can work with Chewie and his needs. We found an awesome sitter who helped us out a lot with him at our wedding.
And for the record, since the BLUNTMoms article mentions this, I do not treat Chewie like a human to the extent of ignoring his animal needs. I don't put him in a stroller or make him wear hats. (Okay, he's worn a Santa hat ONCE in his life, and didn't particularly like it, so he's never had to again.) I do read him The Night Before Christmas on Christmas Eve, because he genuinely loves it, and falls asleep on my lap while I read to him. And then the next morning, he gets excited for all the new toys Santa has left him (and yes, I know that Chewie doesn't understand the concept of Santa--I'm not that delusional).

Anyway, my whole point with this post is that we shouldn't be defining what it does and doesn't mean to be a mom. The experience is different for everyone, and getting insulted because someone loves their dog the way you love your child is unproductive. There isn't a limited amount of love in the world, or a limited number of people who are allowed to be "moms." Let's just all celebrate the fact that we do something amazing--we care for someone else, and we give them a great life.
Love,
Savy 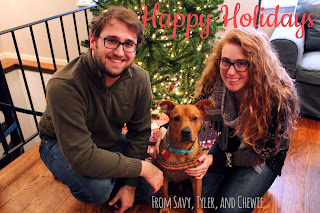