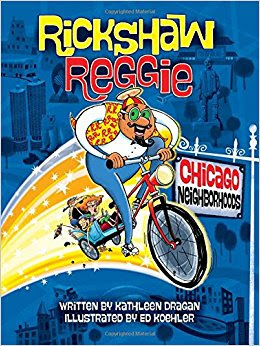 You know what my favorite type of author is? A Chicago author! That means either an author who lives in Chicago, or an author who writes about Chicago! And Kathleen Dragan is both, so I was super excited to review her new children's book, Rickshaw Reggie!

I received an advanced copy from the author in exchange for an honest review. Rickshaw Reggie officially comes out on July 15! That's in one week! At that point, you'll be able to buy this book on Amazon, here.

Guys, I LOVE this book! It's so, SO adorable! Charlie and his grandma meet a magical guy named Reggie with a flying rickshaw, and he shows them all around Chicago. He takes them to a variety of different neighborhoods, and they learn all about each neighborhood's history, culture, and landmarks. It's super cool!

What's also fun is that Rickshaw Reggie speaks entirely in rhymes. Often, it's difficult to insert rhymes into a mostly prose book and have them blend in nicely. But Dragan has a fantastic understanding of rhyme, meter, and rhythm, so all of Reggie's lines sound great.

I also enjoyed Charlie and his grandma. It's super cute that Charlie's grandma learns about new Chicago neighborhoods, even though she's lived here all her life. That was SO relatable for me. My family's from Chicago as well (and we still live here), and we're constantly finding new neighborhoods. My mom grew up on the South Side, and I live on the North Side, so I'm always introducing her to new neighborhoods near me, like Uptown and Lincoln Square and Edgewater. Chicago is SUCH a huge city, that you can live here for decades and still not see everything.

I also appreciated that Charlie's grandma comes from a family of Polish immigrants to Chicago. That's what my family was, too! This book just spoke to me on so many levels! I feel so lucky that Dragan approached me for a review of this! :)

Anyway, I highly recommend this book. It's great for teaching kids (and adults!) all about Chicago, and the wide range of diversity that its neighborhoods have to offer.

The only thing I wish Dragan had done differently was include more neighborhoods. There are so many more that weren't addressed. I wanted to see my neighborhood, Uptown, represented here, since I think we have a really beautiful culture and history.

So, I guess what I'm saying is, please write a sequel! :)

If you guys decide to read Rickshaw Reggie, I hope you enjoy it!