Book Review: Custodians of the Cosmos

Custodians of the Cosmos
By Drayton Alan 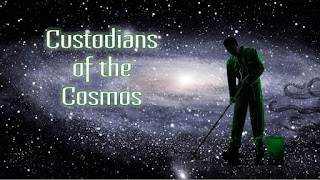 Custodians of the Cosmos was funded a few months ago through Kickstarter! Drayton Alan was running his Kickstarter for this book around the same time I was running mine for The Furever Home Friends, so we did a trade and contributed to each other's campaigns. As a result of my contribution, I received the ebook, and agreed to review it!

I was excited to read this new sci-fi parody because I knew, based on its description, that it would have a lot of Star Trek references. Everyone who knows me knows that I'm one of those annoying Star Trek fans who draws fan-art and rattles off episode titles and numbers.

Custodians of the Cosmos takes place in the future on a starship, where humans and aliens come together to explore all of space, get into fights, join alliances, you know the drill. What's interesting about this book, though, is that instead of focusing on the ship's captain or senior officers, this story focuses on the ship's janitors.

The main character is a young janitor named Kale Butterly. Kale did not make it into the academy, where he would train to become a starship officer. Instead of re-taking the entrance exam, he's decided to work as a janitor on a starship, hoping he'll get a make a good impression on the captain and get a recommendation for the academy. Of course, it's never that simple, and Kale finds himself in the center of tons of weird alien guts, space battles, and, of course, weird co-workers.

What I really enjoyed about Custodians was the humor. There were a lot of great one-liner jokes in this, which created a fun, light-hearted tone. One of my favorite jokes is, when Kale has to state his name and order for the food replicator, he says that he's Kale Butterly and wants pancakes. The replicator constantly misunderstands him and thinks he wants buttery kale, so he's forced to keep eating kale every day. Then, later, we find out that there is an officer named Pam Cates who keeps getting pancakes when she wants the buttery kale. That's probably my favorite joke in the book. It had me laughing out loud. I love a good pun!

So this is a really funny book, with lots of great jokes. The one thing I didn't really like was that I didn't understand how much it was supposed to be a Star Trek parody, and how much it was supposed to be its own standalone story. Sometimes the Star Trek references were so on-the-nose that I thought maybe this was directly making fun of it. For example, the First Officer's name is Frakes. I assumed he was a direct parallel to Riker from The Next Generation, but then Frakes was always super mean and misogynistic, and I really like Riker, so I wasn't sure what the author was trying to say there. Also, the alien species that values war and honor, and eats lots of worm-like foods for dinner (essentially the Klingon parallel), is called the Warfians. That one didn't bother me as much, but it did make me start second-guessing every character in the story to see if it was a Star Trek parallel I was missing.

Overall, if this story sounds interesting to you, go ahead and give it a read! I thought there was a lot of great humor in this, but I just wasn't sure what was supposed to be a parallel and what wasn't, and I kind of became confused about the tone of the story as a whole. But if you want some light, fun reading, and some good puns to make you chuckle, try Custodians of the Cosmos!