American Girls of the Future

Some of you may know that I have a side blog. I don't update it nearly as much as I update this one,  but when I do, I go all-out with the photography.

It's called American Girls of the Future. 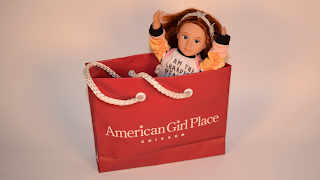 Back in the 90's, I spent all the money I earned at garage sales on American Girl stuff. I loved my girl Molly, whose father fought in World War II, and my girl Kit, who dreamed of being a reporter while her family struggled in the Great Depression. As I’ve grown up, my love for toys has never diminished. I still buy Lego; I still buy Barbies. I’m a full-grown adult with tattoos, piercings, and a college degree, but I sometimes spend an afternoon wandering around the American Girl store by myself for fun.

But the store has changed. For one thing, AG is pushing their modern-day dolls, especially their Girl of the Year line, a lot more than their historical dolls, since modern girls are also a 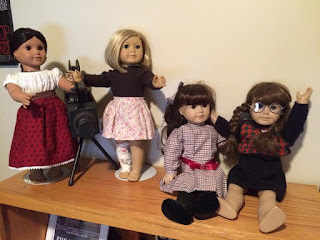 part of history. However, it seems that a lot of these girls are dealing with local, and often softer issues than their historical counterparts. This blog is to bring that controversy, that historical significance back to American Girl. There is so much going on in the world right now. So many interesting and significant social movements to take part in. I’d rather look back on a Girl of the Year from ten years ago and say, “I remember that year. Her story  captured it well,” than look back on fifteen Girls of the Year who dance, brush their horses, and sometimes get involved in their local communities. (Plus, no one can afford horses anymore.)

After one day of aimless wandering, I left the American Girl store feeling a little more inspired than usual. I thought to myself, "Why can't the modern girls take part in the social movements of our time, the way the historical girls did in the past?"
I sat on the toilet at the Water Tower Place and planned out what American Girl's ideal next 10 years of Girls of the Year could look like. And I tweeted all of it.
When I got home, I saw that my posts on Facebook and Twitter had gotten decent attention. People I'd never met before were arguing on my social media pages about what kinds of dolls little girls should have, and whether or not the modern-day girls should tackle controversial topics.
I LOVED it!
So, I decided to turn it into a blog, where I explore what future American Girl dolls could look like, if they were to truly represent what America is like for young girls in that year.
We have Amy, who makes a documentary on homelessness to attract the attention of her mom, who's a senator. 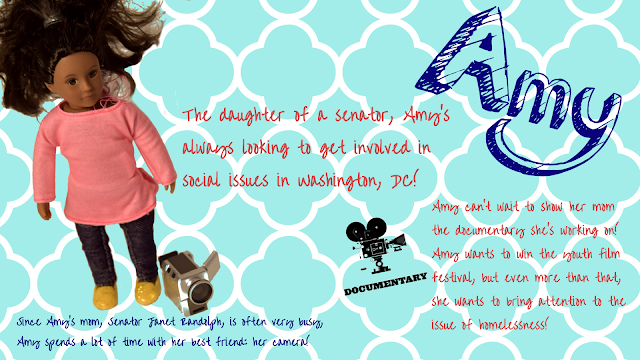 We have Reagan, whose mom loses health coverage, so she makes health care access a topic in her campaign for fourth-grade class president: 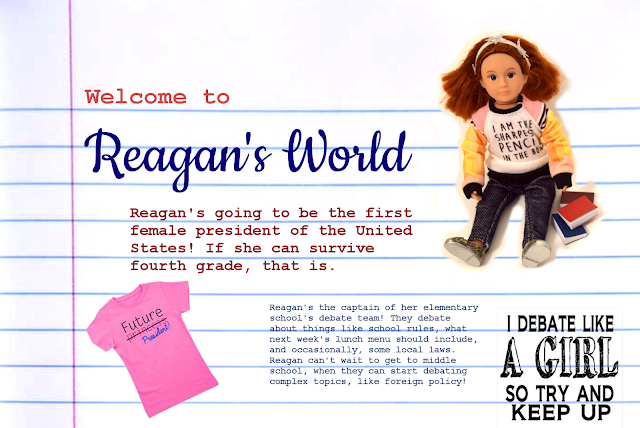 Unfortunately, Chewie ate Reagan's feet, one of her hands, part of her arm, and part of one of her eyes. I've so far been unable to find another Reagan doll (not sure what her original name was...she's a knockoff) at Target, so my plan is to use this doll for a far-in-the-future Girl of the Year, like maybe Girl of the Year 2380 or something, and have her get captured by the Borg while exploring deep space with her parents. Maybe she'll have robot parts.

We have Ellie, featured in 2020, who gets in trouble for making fun of Trump during her talent-show comedy routine. Ellie learns an important lesson about free speech, and what it means to be censored. 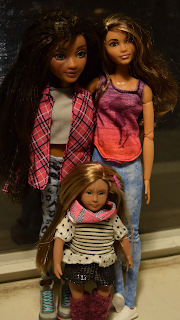 And we have Gen, an aspiring fashion designer, and the only girl in her class to have two moms. In 2021, when Gen is in fourth grade, she bands together with some of her friends to fight for LGBT rights in her small town.

I'll keep adding more characters periodically. Do you have any ideas for American Girls of the Future? Do you like doing toy photography? If so, let me know, and I'd love to feature you on my blog (either this one, or the AGoTF Wordpress page)!

Hope you enjoy them!