Skip to main content
Labels
Posted by savyleiser May 22, 2017

Make Friends with Your Characters!

When I learned the right way to develop characters--you know, figuring out their strengths, their weaknesses, their flaws, their areas of expertise, their arc, etc.--developing characters suddenly got a lot less fun.

The most fun I ever had creating characters was when I was in middle school. I’d lie on my bedroom floor, sprawled out amid messy piles of loose-leaf paper, hand-writing notes that my characters were passing to each other during class. I would change my handwriting to match each character’s style--messy for the more careless characters, neat for the studious characters, i’s dotted with triangles or hearts for the edgy characters--and would intentionally spell some words wrong to make it more realistic. I got each character’s voice down, and from those notes came a story. (A terrible story. I finished the novel when I was 15, and none of you will ever read it. It’s basically Degrassi High: The Novel, but everyone has MySpace and listens to My Chemical Romance.) 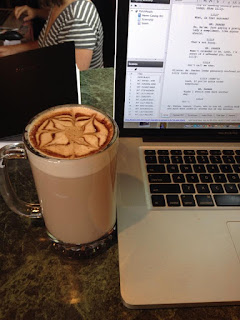 As an adult, I’ve found developing characters to feel a lot more like work, which sucks. Developing characters used to be the most fun part of writing. Of course, my writing is much better than it was ten years ago, but for a while, I felt like the joy was lost.

Then, I came up with some new techniques for creating characters. For me, character development is about figuring out an aesthetic and a feel for each person. And for me, that doesn’t come from graphic organizers.

So, if you’re stuck on your characters, or feeling less than enthused about the process of creating new ones, try these tips!

For my most recent two novels, I’ve made Pinterest boards for each of my main characters. I usually make these boards private, since I don’t use Pinterest for social networking. However, if you’d like an example of how I’ve done this, you can check out my boards here: https://www.pinterest.com/savyleiser/ I made my most recent three boards public so that my critique group could view them. These are the main three characters of Sculpt Yourself, which is the new novel I’m planning for JuNoWriMo.

Making Pinterest boards allows me to think about each character’s interests, then find pictures online that represent those. I can think about what the characters wear, what they eat, and what colors they like. When I put it all together on one board, I can step back and take a look at the character as a whole. Then, I remove any pins that feel out of place. What’s left makes me feel like I know that character’s complete aesthetic.

What’s more fun than playing video games and saying it’s work? When I’m figuring out new characters, I’ll sometimes make them on The Sims. That way, I can figure out exactly what they look like, down to the space between their eyes and the color lipstick they prefer. Now, the majority of the time, these minute physical details won’t make it into the actual story. But it doesn’t matter. It’s just all part of figuring them out, and you never know what details WILL end up mattering.

Then I get to have fun designing their house! And making them interact with each other! Of course, after a few hours, I have to finally admit to myself that I’m playing rather than working, but more often than not, I come out of it with a clear picture of each character in my mind.

The most recent novel I completed, One Final Vinyl (not yet released), features music as a means of storytelling. Since the characters in this book connect and relate to one another through music, a big part of figuring them out was finding songs that represented them. I had a blast going through all the music I loved as a teenager, like The Killers and Paramore, and mixing it with the timeless music I’ve always loved, like Billy Joel.

I LOVE talking to myself! I don’t even worry about looking crazy anymore. As writers, we’re all a little bit crazy. I talk to myself when I’m lying in bed staring at the ceiling. I mumble quietly to myself when I’m walking down the street. And, just like everyone else in the world, I have lengthy conversations and debates with myself in the shower.

Talking to yourself in your character’s voice is one of the fastest ways to figure out their voice. Something about writing the words down on paper--or, especially, typing them--feels formal. Though we have erasers and backspace buttons, there’s still a weird finality about it that sometimes trips us up when we’re first figuring a character out. That’s why I suggest rambling to yourself. You’ll forget 90% of what you say. But the good stuff will stick.

Hope this helped someone!