I’m so excited to start JuNoWriMo two weeks from tomorrow! As you probably know, NaNoWriMo takes place every year in November. Writers have the month of November to complete the full first draft of their novel, usually setting a goal of 50,000 words or more. 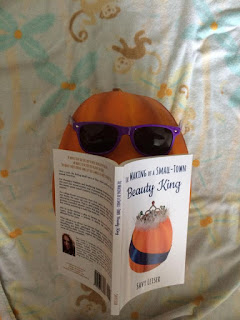 I’ve never been able to participate in November before. In high school and college, November was peak marching band season, meaning I was spending all of my time outside of classes practicing, performing, and competing. Now that I’m out of school, November has still always seemed to be my busiest month. November 2015 was the month I switched from doing one job I hated, to a bunch of jobs I loved. That, and preparing to release my first book, The Making of a Small-Town Beauty King, the following February. In November 2016, debate season was in full swing, and I had my hands full coaching middle schoolers, as well as preparing to quit my day job in an office so I could pursue teaching creative writing (which I now do at Open Books!).

Basically, November never seems like the right time to try writing a full novel in one month. I once tried to write a full draft of a novel in September, but since I just kind of picked a random month and did it, there was no community for it. With NaNoWriMo, you have Twitter hashtags, online forums, the works. As an extrovert, I really needed a community to keep me motivated, especially with something as emotionally exhausting, and not-immediately-rewarding, as writing a whole novel in one month. So I didn’t finish that month.

You can imagine my excitement when I found out JuNoWriMo was a thing! Similar to NaNoWriMo, you write a full draft of your novel in a month, but in June rather than November! That’s so perfect for me! In June, the school year will have ended, so I’ll be teaching a lot less. Though I’ll be spending most of June focused on preparing the first to books of the Furever Home Friends series for publication (rewards ship to Kickstarter backers in August!), I’ll still have way more time than I would have in November. And I’m determined to get a first draft completed!

I’m so excited for Sculpt Yourself, the novel I’ll be writing this June. I wrote a version of it as a short story back in college. I really loved the concept and enjoyed writing the characters, but I (and pretty much everyone else who read it--including classmates, professors, and all the sci-fi magazines that rejected it) agreed that it doesn’t work in the short story form. There’s too much territory left unexplored. I guess I’ve always known it’s meant to be a novel, and I’m finally going to write it!

I’ve got tons of preparation done. I’ve written character bios, made Pinterest boards for my characters, done daily writing sprints about this story, and agonized over the plot outline. I’m going to keep preparing right up until the first of June, but I’m pretty excited and feeling ready. I’ll probably be in for a big surprise when I end up stuck right away.

I’ll make sure to post updates as I make my way through JuNoWriMo! I’ll mostly be documenting my journey on Twitter, so please follow me there, @SavyLeiser! I’d love to follow you back and see what writing you’re up to as well.

Are any of you planning to participate in JuNoWriMo?

Any advice from people who have done this, or NaNoWriMo, before?