Skip to main content
Labels
Posted by savyleiser May 25, 2017

Book Review: An Abundance of Katherines

An Abundance of Katherines
By John Green 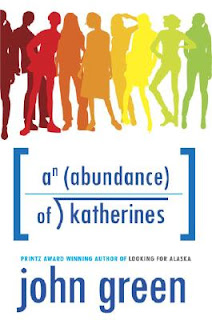 I've read this book twice over the past ten years. I know that's a long period of time, but I rarely read books twice, unless they're REALLY good.

In 2006, when An Abundance of Katherines was first released, I was a cute little 14-year-old nerd. I was the young nerdy kid in the math class with all the older kids. And, I was a melodramatic, hopeless romantic. I saw an immediate reflection of myself in the main character, Colin. (Well, except I wasn't AS smart as him. But at 14 you can ignore that.)

When I re-read this book at 23, it held an entirely new meaning for me. Since Colin always grew up as the smart kid, once he reaches adulthood, he's worried about what kind of future he has.  Now he has all this self-imposed pressure to make amazing discoveries, to become the genius everyone expected he would. But inside, Colin is worried that he peaked too early, and that he'll never be anything more than a washed-up child prodigy.

While I was never any kind of child prodigy, I think a lot of people right out of college can relate to what Colin's feeling here. You grow up with big dreams, and along the way, you find what it is you're really good at. You slowly become the best at that thing out of your group of friends, or your school, or your city. Then you enter the workforce, where you're surrounded by people older, more experienced, and better than you--and you wonder if you ever had all the potential you once imagined you did. Just like Colin, we all start to fear the possibility of being forgotten--never contributing anything meaningful to the world.

This book did a fantastic job speaking to that internal struggle. I love so much that I can read this book right before entering high school, and then again a year after graduating college, and feel completely different things--but still love the book just as much.

John Green did a fantastic job of creating a super-smart character, without ever letting him feel like a sitcom stereotype. Though this was told in third person--somewhat of a rarity for YA books--the immersion into Colin's mind is seamless. Colin has one of the most memorable voices of any character I've ever read, and the story isn't even told directly from his perspective.

I actually used this book as a major influence when I went to write Beauty King, my first YA novel, since mine is also a YA story told in third person.

Hassan, Colin's best friend, and Lindsey, the girl he meets on his road trip, are also fantastic characters. They're funny, sassy, and believable. You almost feel like they're your real friends.

Overall, this book remains at #1 on my list of favorite YA books. I've loved it for 10 years, and don't think I'll ever stop. Although, tomorrow's review will be about the one book that almost beats it... Get excited! :)

Have you read An Abundance of Katherines? What did you think?

What are your opinions of this compared to John Green's other books?

Let me know in the comments!