I’ve always been afraid of change, and terrified of permanence. So I did what any logical person in my situation would; I got a tattoo.
A huge, obvious one too. On the outside of my arm, where even most T-shirts won’t hide it. I had wanted a tattoo for a long time, and I decided I was going to stop letting fear dictate my decisions.
This fear of permanence– and, more specifically, of the future– had been long manifesting itself within me, ever since I experienced my first existential crisis. I was five years old. I Love Lucy was playing on the chunky mid-90s TV in my kitchen, and as I was watching the show, it hit me. Lucille Ball was dead. And yet here I was, still watching her. But she’d have no way to know I was watching her, or to know that anyone was still watching her. Because she was dead. And that’s when I realized that, no matter how successful I grew up to be, or how famous I became, or how big of an impact I had on the world, one day I would die, and whether or not other people still remembered me wouldn’t matter to me, because I’d have no perception of it. I’d have no perception of anything. This was too much for my five-year-old brain to handle, so I broke down crying, and my poor mother had no idea how to deal with the fact that her cute little kid just had her first understanding of mortality.
As a child, I thought about death a lot, or, more specifically, how I feared death. I would spend nights looking at old photographs and wishing I could go back to that time– even if it was only a couple of months in the past– because anytime in the past was farther away from my death than anytime in the present or future.
When I was 11, I saw a movie that I had no idea would change my life: Back to the Future. As an 11-year-old, I liked it because I thought DeLoreans looked cool, and I thought it was funny that Marty had to deal with his parents as teenagers. But as I’ve gotten older, the idea of time travel has become more and more interesting to me.
A month after I first saw Back to the Future, I was diagnosed with scoliosis. At 11, I was reasonably terrified, if not for the frequent hospital visits and various treatments, for the permanence of it. I started fantasizing about traveling back in time, before I knew anything was wrong with me, or just waking up in the past one day, none of this ever having happened.
But I never woke up in the past. Instead, I moved forward, as time forces us all to do. My back never got better. Instead, I continued to stand unevenly and frequently walk with a limp.
I spent most of high school beating myself up over the past. After every failure, every loss, every time I did less than perfect or earned less than first place, I’d berate myself for hours or days about my regrets, about how I should have done better, about how I wish I could go back and do things again perfectly. I eventually became an uptight, overly competitive, highly stressed out teenager with unreasonable levels of anxiety.
In college, I studied film. I wanted to get to create things that had the impact on other people that directors like Robert Zemeckis were able to have on me with Back to the Future. As I started to mature in college, I started to learn to relax more and live in the moment. At the same time, that brought with it a sense of impulsivity that caused me to make stupid mistakes, which led me back to criticizing myself about the past.
Toward the end of college, I decided I wanted to get a tattoo. The idea of creating visual representations of ideas that matter to you, and putting them on your body, had always appealed to me. My original plan was to get a full-back tattoo of my spine, anatomically correct, with its messed up curves and everything. I thought it would be a cool way to show everyone that I owned my flaws, and was willing to flaunt them. However, I soon learned 2 things. 1. Full-back tattoos cost hundreds to thousands of dollars, and 2. tattoos along the spine are described as causing “pass-out level pain.”

So instead, I decided to get something else for my first tattoo, right as graduation was approaching. I got the words “where we’re going, we don’t need roads,” the last line of Back to the Future right before they traveled to 2015, to signify the year it was. I got the words in Courier font to represent it as a line in a movie, as well as the fact that I’m planning to start a screenwriting career as soon as I can. Above them, I got the DeLorean, my favorite car, as a sign that it’s time to travel forward. Time doesn’t need roads. Time will move you forward whether you want it to or not. 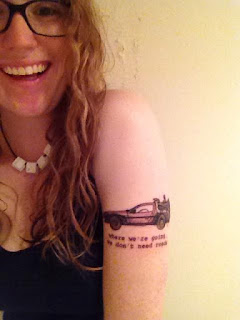 Every time I feel like criticizing myself about my past mistakes, I can look at the tattoo on my arm and remind myself that I’m excited for the future, and that moving forward is what we’re meant to do. And I’m glad that my reminder is permanent.